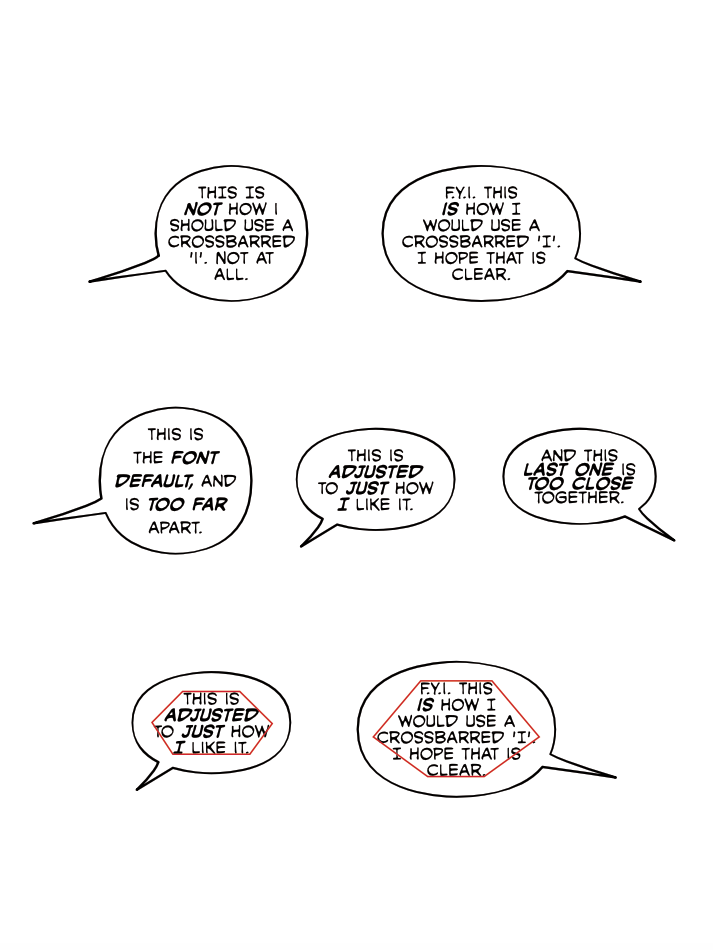 Most of my comic book lettering is done within the UK small press scene. It’s a scene I love being part of – so many awesome stories being told, and in a far more eclectic manner to mainstream comics. A down side of small press or self-publishing is that budgets are tighter, and as a result things like lettering get delegated to someone untrained in the art form. I am a graphic designer by training, and a perfectionist by nature and when the quality of lettering drops (as with any aspect of the story), I struggle to stay interested. As with any art form there is degree of subjectivity to it, but lettering is considerably further along the spectrum than the main pencil or inks of a story, or at least there a number of rules that need to be followed regardless of how “stylised” you claim your lettering is. I made ALL of these mistakes when I first started out, particularly number three!

When this came up on the Awesome Comics Talk Facebook group the other week it got me thinking about what creators could do, short of hiring a professional comic book letterer, to improve the lettering in their comic. It has taken me a few weeks to get this written, but here’s my “3 ways to spot amateur comic book lettering”.

This is one that drives me a little bit crazy – because it’s not a secret. If you make comics, then I struggle to believe that this hasn’t floated by on your Twitter or Facebook feed at some point. It is an error that sometimes rears it’s ugly head in professional lettering too, usually where someone has missed a stray one. The rule is actually quite simple:

Some letterers/editors like to use a crossbarred version on acronyms like F.B.I. and M.I.5 which I don’t mind, but it’s an aesthetic decision in those circumstances. Comic book fonts, at least ones design by or for professional comic book lettering, come with both types of I’s. Where you find them vary’s between foundries, and also if the are lowercase letters, but if it’s not in the usual place it is behind the long vertical stroke: | (on my keyboard it is “shift” +  “\”).

Leading is the space between two lines of text (historically from where they put actual bits of lead in between lines), so people call it line-height, which a web design term. Lines of text in comics need to be much tighter together than normal block of texts you will see in books, or on web pages. Traditionally letterers would mark out lines using an “ames guide” but this is now set in the software you are using. Annoyingly it varies from font to font, but as a rule:

By this, I am referring to how the lines of text are stacked in a balloon. Professional lettered dialogue is centre-aligned and almost always in a diamond/hexagonal shape with the longest lines being in the middle and the shortest lines being at the top and bottom. There a few other things to bear in mind when stacking lines of text:

These are just a few of the mistakes you commonly see in lettering. Avoiding these will help, but this is just the tip of the iceberg. There are LOTS of rules that letterers take into account when doing their job, the real pros do most of these instinctively after years of practice. Some great places to start are: Blambot’s MANY fonts/resources – his tips section is fantastic; and Comicraft’s “Comic Book Lettering: The Comicraft Way“.

If all this sounds too much then there are lots of letterers available for hire – but you can get in touch with me via my contact page, or Twitter.